All thrash and blue smoke baby 🙂

Please note – the diagram below represents a very simple version of a 2 stroke motorcycle engine, in reality, they are a little bit more complicated! 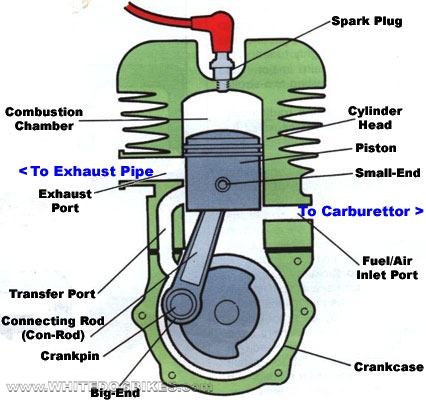 Induction: As the piston travels down the cylinder head, it ‘sucks’ the fuel/air mixture into the cylinder. This is known as ‘Induction’.

Ignition: When the spark plug ignites the compressed fuel/air mixture, sometimes referred to as the power stroke.

Transfer Port: The port (or passageway) in a 2 stroke engine that transfers the fuel/air mixture from the bottom of the engine to the top of the cylinder

We have simplified this explanation as much as possible so some of the ‘correct’ terms have been replaced. There are many more factors which enable an engine to run, such as fuel/air ratios, ignition timing and shaped piston heads (extensively used in 2 stroke engines) but the explanation below outlines the basic differences between 2 and 4 stroke engine operation.

2 thoughts on “How a 2 stroke motorbike engine works”